On Saturday 3rd March 2018, The Masonic Clay Target Association held its second event at the Cessnock Clay Target Club, hosted by the members of Lodge Cessnock No.252.

Participants travelled from Manilla, Tamworth, Scone and Singleton in the North and Sydney and Newcastle in the South as well as from other areas including The Sunshine Coast. There were over 40 shooters on the day as well as a good number of spectators. The Cessnock Clay Target Club set up a very good and varied array of 30 targets, some of which were quite challenging!
As always, there was a fair degree of good natured sledging and rumours of nobbling and “ring-ins, “which added much humour and atmosphere to the day. There was a good number of first time shooters and these were ably coached by volunteers from the Cessnock Clay Target Club. Many thanks to those volunteers.
After a BBQ lunch provided by the members of Lodge Cessnock it was time to tally the scores and hand out trophies. These were awarded for the best score for men and women. The men’s winner was Ron Wakem with a very impressive score of 29/30 and the women’s winner was Sue Munro. Despite claims to the contrary, no one had a score of zero, which is a credit to the “coaching staff.”
Again, thanks and congratulations to Lodge Cessnock and the Cessnock Clay Target Club for a successful and enjoyable day.
The next event is being planned for later in the year, most likely early Spring to avoid the cold weather. If anyone wishes to participate in an informal shoot, Lodge Calala Tamworth will be having a BBQ night shoot as part of their December meeting, where the losers trophy between them and Lodge St. Andrew’s (Manilla) will again be hotly contested. (Contact us via MCTA email masonicclays@gmail.com).
If any lodge wishes to host a day, please contact MCTA at the above email. We are happy to oblige! Remember this is for all NSW masons.

Thanks to Tony Sims for this article.

The Inaugural shoot of the Masonic Clay Target Association was held on Saturday 23rd of September 2017.

After a most enjoyable South at the Tamworth Clay Target Club range, The Grand Master fired the first shot and despite rumours of back-up marksmen on the grassy knoll, brought down the first target and the Masonic Clay Target Association was away! The brethren, having been forewarned that achieving a higher score than The Grand Master was possibly a masonic offence, were very circumspect in their aim, but on realising that sledging was allowable (perhaps even encouraged) this loophole was used to full advantage.

Some 50 brethren, Ladies and visitors participated in a very enjoyable afternoon and then scores were tallied. The youngest shooter, 14 year old Archie Douglas of Sydney, achieved a very good score, in a hard fought battle with his father James. Somehow the score-sheets were not entirely clear, but W.Bro. Laurie Littlefield of Lodge Wyong Tuggerah Lakes was declared the men’s champion and Chrissy Quinn was declared the women’s champion, but most seem to remember that some bloke named Melville was the overall winner!

The special prize for the lady who beat her husband was declared to be confidential by The Chairman of The Board of Management. Congratulations Sue!

Although a little slow to start, The Grand Master’s wife Yuana, who had never shot before, finished the day with a very creditable score and on being given the choice between golf clubs and a shotgun for Christmas, declared that the latter was her preference! Yuana was rewarded for her persistence and willingness to take pointers from the members of Loomberah Gun Club who supervised all activities on the day and helped make the event a success.

The Association then thanked the members of the Tamworth Clay Target Club for volunteering their time and facilities and offered a special thanks to Craig Mearns of Calibre Country for allowing The Grand Master to use his VERY expensive shotgun.

Preparations for the next event are underway. (Thanks to Tony Sims for this Article)

P.S. There was also a continuing competition between Lodge Calala/Tamworth and Lodge St Andrews for the Hard Luck Trophy. On this occasion the trophy was destined  to remain with Lodge St Andrews who were without the help of Lindsay Cederblad.

Some photos from a previous outing when Lodge Calala/Tamworth 652 and Lodge St Andrews 281 from Manilla competed in a night of friendly rivalry for the Hard Luck Trophy. 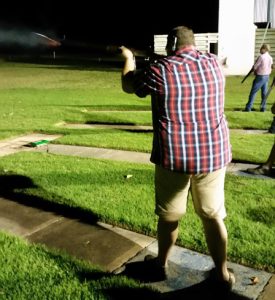 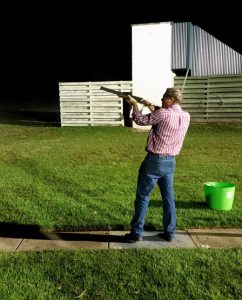 We won’t mention who was awarded the trophy on this occasion.

The recently formed Masonic Clay Target Association will be conducting their first event on 23rd September 2017 at the Tamworth Clay Target Club range.

This association was formed after several successful corporate style events held in the Tamworth region and a few like-minded brethren decided to take it further. Membership is available to masons and non-masons alike and it is envisaged that three to four events will be held in various locations throughout the year. All meetings will be fully supervised “corporate style” events, meaning that participants need not have a firearms licence or a firearm, provided they complete a P650 form on the day. Membership will be $20/year for members (masons) and $20/year for associate members (non-masons), including anyone over the age of twelve.

Before the meeting of the association, Lodge Calala Tamworth will be holding a 9.00am meeting at the Tamworth Masonic Centre to raise brother Lyle Cryer to the Third or Sublime Degree of a Master Mason. The Grand Master has agreed to attend this ceremony and participate in some way.

At 2:00pm after a barbeque lunch, the patron, Most Worshipful Brother Jamie Melville will fire the first shot and the twenty-five target “competition” will begin. Although not a formal competition, scores will be kept and no doubt reputations will be on the line!

It is rumoured that any brother achieving a higher score than The Grand Master will be guilty of a serious masonic offense and will be dealt with accordingly. However, it should be noted that whilst a score of this nature is an offence, sledging is not!

There will be a special prize for the lady with the highest score, especially if she beats her husband/partner.

Those wishing to attend will need to reply by 9th September for catering and supervisory purposes. The cost will be $35.00 for those who wish to try their hand at clay targets and an additional $20.00 for the meal. We can cater for any combination of participation.

All inquiries and replies to R.W.Bro. Tony Sims at masonicclays@gmail.com

We will be holding our Inaugural shoot on Saturday 23rd of September.